Have you ever been to the Common Ground Cafe in the small town of Picton?

Been intrigued by their way of life and their different way of dressing? Tried the green drink and wondered where they get their fresh produce to make it from?

Well,I had the privilege to witness first hand what goes on behind close doors at their farm adjacent to the cafe thanks to their celebration of Shavuot.

The lovely people from Peppercorn Creek Farm are members of the religious group known as the ‘Twelve Tribes of Israel’ and like to live their lives free and in peace,serving others.

We were welcomed to their farm on Sunday morning and led to the celebration grounds,greeted by the other members of their community and invited to help ourselves to the generously delightful spread they put out. Wow, what a selection we had! From organic fruit, home made cookies full of yummy chemical free ingredients, to Hot tea, cold tea and their specialty; Ice cold green juice.

PLUS an abundance of the best mouth watering pastries I’ve ever had.

As the crowds started pouring in, one of the members came to the stage to announce the beginning of their official Shavuot parade.

We made our way to the river’s edge as the sound of instruments began.  Out came members of the community each holding something they’re thankful for. The leaders holding two large hand made braided loaves of bread  to be broken among others later. 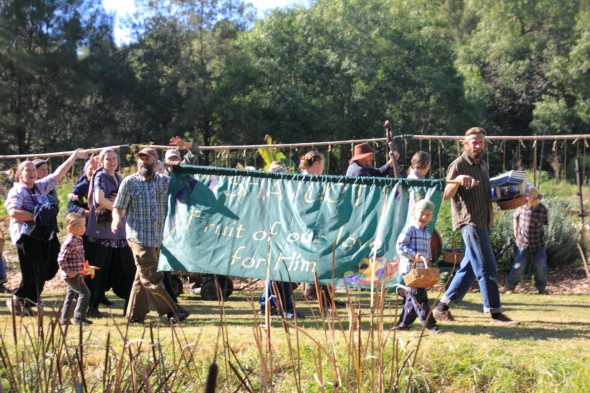 A while later while we sipped our hot Mate tea and munched on some carob and coconut cookies we took a wonder through the grounds of the farm.

The community members are very much into farming and growing their own organic produce. There were so many crops of tomatoes,kale,corn,zucchini and sunflowers.

Then there are their farm animals. Goats and some of the biggest chickens and roosters I’ve ever seen! The sheep were in the paddock next to their cafe so we were unable to see them.

With so many children about both part of the community and guests there was plenty to keep them occupied and without a single digital device in sight!.

The rope swing near the river was very popular. It was almost as if these children have never seen such a thing and there were plenty of squeals of delight.

Speeches were then made thanking everyone for attending today’s festivities as well as members saying what they were thankful for. Followed by folk dancing by members and children and songs sung loud and proud. 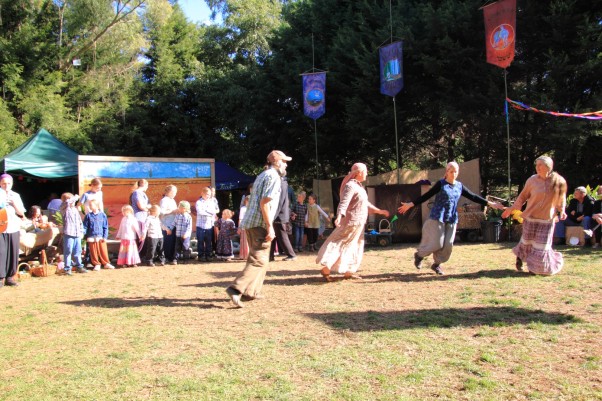 After sitting back and relaxing under the bright sun we were called to the ‘Tukkah Tent’ for lunch. We were served the yummiest lamb and vegetable stew with rice and Turkish bread on the side.

Wow! Unbelievable! Such a mouth watering meal and the Turkish bread was to die for,just so soft. You could almost taste the love in it.

In between a bit of chit chat and after our stomach were full from such a magnificent meal there was an announcement of a play to start in the property next door by members of the community.

The amount of land they use is outstanding.

The youngest of members andt off to dress in their costumes getting ready to begin.

What a play they put on! Not only was it entertaining but it also had a good moral behind it.

We were told the story of a farmer attempting to grow sunflowers and with climate conditions being up and down we were taught about how the weather effects their growth.

And how cockatoos love sunflower seeds. Ha ha didn’t that get the crowd in fits of giggles.

As it got on in the day there were more celebrating to come.But alas we had to make a move to go home because of the distance.

This was just such a wonderful day and I feel blessed to be able to attend and witness first hand how the community of the ‘Twelve Tribes’ lives and breaths.

They are just such friendly and happy people.If only we could be as happy as they are.

I’m thankful for finding out about this event and even more thankful to be welcomed with open arms into such a beautiful community.

Their next celebratory festival will be held in October and i encourage you to come out for the day and see for yourself what goes on.

One thought on “Celebration of Shavuot”